Nishan-e-Pakistan, Kashmiri separatist leader Syed Ali Shah Geelani passed away in his Srinagar residence late on Wednesday night after a prolonged illness. He was 91 years old and had suffered a heart attack in 2018.

He was the face of the rabid Kashmiri separatist politics for over 3 decades thereby actively promoting Islamic terrorism among the youth in the valley. He led the Hurriyat conference for decades before resigning last year due to his failure to whip up separatist sentiments and violent protests after the abrogation of article 370 by the Modi Government. Geelani also spearheaded the genocide of Kashmiri Pandits that happened in the 90s.

Security has been strengthened in Kashmir Valley following his death and internet services have been suspended as precautionary steps to avoid any protest and stone-pelting. Scores of armored vehicles and trucks patrolled main roads in Srinagar amid heightened security.

Troops put up barbed wire and barricades on roads leading to Geelani’s house in the main city of Srinagar after the family announced the death. Announcements were made from loudspeakers of the main mosque near Geelani’s residence asking people to march towards his residence.

The police in a statement urged the people to remain calm and maintain peace, instructing people not to leave their homes.

Pakistan PM Imran Khan has announced an official day of mourning where all the flags will be flown at half-mast across the country. “Deeply saddened to learn of the passing of Kashmiri freedom fighter Syed Ali Geelani who struggled all his life for his people & their right to self-determination,” the premier wrote on his official Twitter handle on Wednesday.

PDP Chief Mehbooba Mufti Tweeted, “Saddened by the news of Geelani Sahab’s passing away. We may not have agreed on most things but I respect him for his steadfastness and standing by his beliefs. May Allah Ta’aala grant him Jannat and condolences to his family and well-wishers.”

‘Make Cows national animal of India and give them Fundamental Rights’: Allahabad HC to Centre 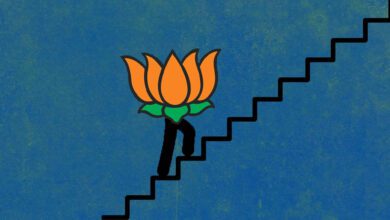